I recently had a requirement for an end user to start some SQL Agent jobs on demand.  For example, the user maintained reference tables in an MS Access database.  After they updated the Acces tables, they needed to run the SQL Agent job that updates the matching tables in SQL Server.  However, management did not want to give the user access to SQL Server Management Studio and SQL Agent.  What to do?

This looks like a job for Consultant Man!  :-)  The solution is simple yet effective and the approach can be applied to other scenarios.

The steps are as follows:

The code is where the rubber hits the road so let's try it.

2) Insert at least one row into the table.  We'll do two just to show how this can be scaled to support mutiple jobs.

3)  Create the update that kicks off the job.

Inserted is a table SQL Server creates to hold the new values of the columns.   Above, the trigger selects the RunNow column from Inserted where the JobName = the job we want to run and compares it to 1.  So above, if the Inserted RunNow = 1, the job will be executed.  Note: We test for the Job Name because we have multiple job names in the table and we want to make sure we run the right one.  We could expand the trigger to add another If test that runs the other job in the table when RunNow = 1.  The stored procedure sp_start_job is a SQL Server supplied stored procedure to run jobs.

If the stars are aligned and the house of your zodiac sign is in Jupiter, the job should execute.  If you wrote the job correctly, it will even succeed.

One other thing, it's a good idea to reset the RunNow bit after the trigger has fired.  So a step in the job should set the value back to Zero as shown in the statement below.

Whenever the user wants to run the job, they just need to update the RunNow flag in the table.  There are a number of ways this can be done.  One way, is to create a linked table in an MS Access database table where the user can set the RunNow flag.  Another way, is to give the user a PowerShell script that updates the RunNow flag.  If you would like to know how specifically to do that, please leave a comment so I know there is interest and I can explain that in another blog entry.  For users with access to SQL Server Management Studio, you can just right mouse click on the table, select Edit Top 200 Rows and update the RunNow flag as shown below. 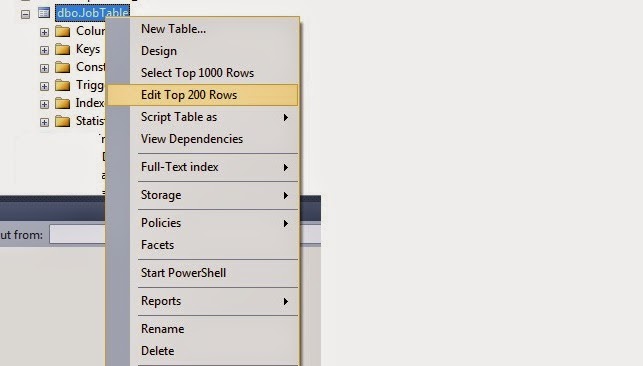 That's all there is to it.  This is a very powerful because it can be applied to other situations.  For example, you could use this approach to kick off jobs from another job, a stored procedure, PowerShell, or anything that can update a SQL Server table.  By simply by updating the RunNow bit column of the row with the job name you want to run, the job will execute. The sp_start_job has parameters to run jobs on other SQL Server instances so you can even use this approach to submit jobs on another server.

The SQL-Fy-Er
I am a Business Intelligence Consultant with decades of experience architecting, designing and developing BI and Data Warehouse solutions currently focused on the Microsoft stack but with experience in Oracle, DB2 and PostgreSQL.